What’s the Difference Between Marginal and Effective Tax Rates? 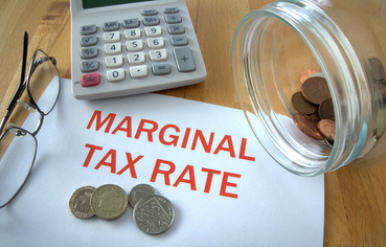 To illustrate how marginal and effective tax rates differ, let’s first look at the marginal tax rates for the 2018 tax year.

Using the above tax brackets, let’s look at how marginal and effective rates come into play.  For our example, we’ll continue to use a single taxpayer with $50,000 in taxable income.  Here’s how that $50,000 would break down in terms of the applicable tax brackets.

There are a few reasons.  For one, political debates over income taxes often center on marginal rates.  A result of recent debate was the Tax Cuts and Jobs Act, which kept the seven tax brackets but modified the tax rates and the size of the brackets.

Marginal tax rates also play a role when considering other types of tax breaks as well. For those who choose to itemize rather than take the standard deduction, deductions that reduce the taxpayer’s taxable income – such as mortgage interest, state and local property taxes, and charitable donations – represent a savings applied against the marginal rate.  For someone with a marginal tax rate of 32% who paid $10,000 in mortgage interest last year, that deduction is worth $3,200 ($10,000 times 0.32).  With enough deductions, that taxpayer could even fall into a lower marginal tax bracket (although taking too many deductions can subject taxpayers to the dreaded alternative minimum tax).

It should also be noted that as a result of the Jobs and Tax Cuts Act, several rules regarding itemized deductions are changing beginning with the 2018 tax year (the return taxpayers will file in April 2019).  In 2018, standard deductions are increasing in a big way – to $12,000 for individuals and $24,000 for married couples filing jointly from $6,350 and $12,700, respectively.  Those higher standard deduction amounts will likely lead to a reduction in the number of taxpayers who itemize their deductions rather than claiming a standard deduction.  In addition, Congress has put limits on up some the big-ticket deductions many taxpayers had been able to use in the past; as a result, those below-the line deductions reported on Schedule A will be less beneficial for many taxpayers.

Calculating Your Effective and Marginal Rates

While the marginal tax rate focuses on what happens at the top of your taxable income amount, it’s your effective tax rate that is typically more meaningful.  After all, it’s what you pay on all of your income combined that matters, not just the portion near the top.

Calculating your marginal federal income tax rate is pretty straightforward – use the tables above to see where your taxable income falls within the brackets.  To calculate your effective federal income tax rate, look at line 63 of your 1040 form to find your total tax.  Divide this amount by your taxable income, found on line 43.  Multiply the number by 100, and you get your effective tax rate.  (This method looks at your tax rate on income after deductions and exemptions are applied; but if you wanted to use your income before these are taken out, you could instead use your adjusted gross income, found on line 37 of the 1040.)

If you also pay state or local income tax, you can do a similar calculation using the relevant numbers.

The Importance of Tax-Efficient Investing

When it comes to income, you know that it’s not what you make, but what you keep after taxes that…

The ideal environment to perform Roth IRA Conversions is: (1) when tax rates are low, and (2) when the market…