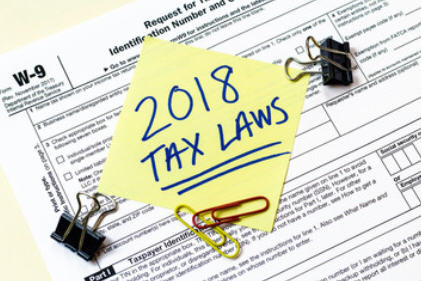 The turn of the calendar page usually ushers in a few small tax adjustments – allowable 401(k) and IRA contributions may get bumped up a bit to account for inflation, along with the IRA income limits and estate/gift tax exclusion amounts.

But 2018 brings more sweeping changes on the tax front, thanks to major legislation that Congress passed and President Donald Trump signed into law in the final days of 2017.

As the new year dawns, here are key tax-related data points to have on your radar for the year ahead. (Note that these changes apply to the 2018 tax year, unless otherwise noted.)

Standard Deduction: Standard deduction amounts are increasing in 2018, to $12,000 for individuals and $24,000 for MFJ.  In addition, the new tax laws eliminate personal exemptions. The net effect of those higher standard deduction amounts, combined with new rules like the one limiting mortgage interest deductions to mortgages of less than $750,000, is that itemizing deductions will be less beneficial for many taxpayers than was the case in the past.  Taxpayers might consider bunching their deductible expenses into a single year, to the extent that they have some control over them, while claiming the standard deduction in other years.

Additionally, beginning in 2018 taxpayers will no longer be able to deduct miscellaneous itemized expenses such as advisor fees and tax preparation fees; through the 2017 tax year, these expenses can be deducted if they exceed 2% of adjusted gross income.  As noted above, the new law limits interest deductibility to mortgages of $750,000 or less.

AMT-Exempt Amounts: Although the new tax laws don’t eliminate the alternative minimum tax, the exemption amounts for it are increasing significantly in 2018, to $70,300 for single filers and $109,400 for married couples filing jointly.  In addition, those full exemptions are available to taxpayers with significantly higher incomes – $500,000 for individuals and $1 million for married couples filing jointly – than was previously the case.

2018 Important Tax Facts for Investors
Qualified Dividend and Long-Term Capital Gains Rates: Three rates are still in place for dividends and long-term capital gains – 0%, 15% and 20% – but they don’t map perfectly by tax bracket as they did in the past.  Here are the parameters for each of the rates.

Medicare Surtax: As in years past, an additional 3.8% Medicare surtax will apply to the lesser of net investment income or the excess of modified adjusted gross income over $200,000 for single taxpayers and $250,000 for married couples filing jointly.

Income limits for IRA conversions: None, but note that the tax legislation eliminated the opportunity to recharacterize a Roth IRA as a traditional IRA, or vice versa.

Section 529 college-savings account contribution limit: Per IRS guidelines, contributions cannot exceed amount necessary to provide education for beneficiary.  Deduction amounts vary by state, and those contributing very large amounts may have to file a gift tax form. Note that beginning in 2018, 529 assets can be used for qualifying K-12 expenses.

A critical component in the development and implementation of a comprehensive retirement plan includes the assessment and mitigation of risks….

The year 2020 brought seismic changes to our lives in most important respects. But as 2021 dawns, the changes to…